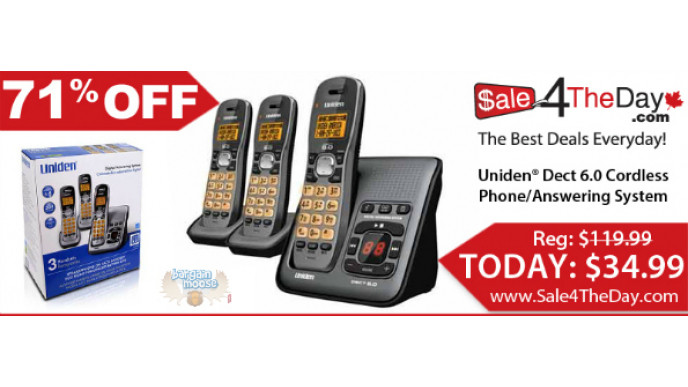 Sale4TheDay is bringing you an amazing deal and BargainMoose is bringing it to you first. As of this posting ( 11:00PM ET) the deal isn't even active yet but we wanted to let you know because it really is an awesome deal on an awesome product. It will go active one hour from this posting, at midnight. In the mean time, feel free to get the barbie that is there. It's also a good deal.

First off, this is a ridiculously good deal. This unit retails at $119 and you pay $34.99. That equals an $84.01 savings. These phones are expensive. You can get them cheaper than full retail, of course but generally not this cheap. Regardless, this is a fantastic deal. If I had a home phone, I'd buy one immediately. Actually, this would be a great Christmas gift. Maybe not overly personal, but useful if you give it to the right person.

Ok, so the full name of the product is a Uniden 3 Handset DECT 6 Phone / Answering System which brings me to a couple of points. First off is the brand name. When I was in High School I worked at Wal~Mart in the electronics department. Any time anyone would come in looking for these phones, I'd always steer them away from any brand other than Uniden. That was because, out of the brands, mostly GE with some others scattered in there, Uniden was the only one that only did communications. GE makes jet engines, fridges and a bunch of other stuff besides phones. I'm not saying GE makes a bad product, I'm just saying that, for my money, I'd rather go with someone who only does one thing and has been doing it very well for a long time.

The second thing I wanted to point out was that this is a DECT 6.0 phone. You may have had cordless phones in the past but these are different. Where you had bad range and signal quality, interference issues and short battery length with your old cordless phone, DECT 6.0 takes care of that. Long battery life, very little interference, much improved range and great quality all make DECT 6.0 phones far superior.